Ambigar Chowdaiah is a special person among the 12th century of Kalyana . He was a ferryman by profession ( Kayaka [ಕಾಯಕ] ) and he stands out among the sharanas for his outspoken and blunt way of expressing his views about the people. He was a true follower of Lingayata dharma and lived his life practicing the philosophy he believed in.

Not much information is available about Chowdaiah's early life or why he went to Kalyana. It is said that he hailed from Chowdadanapura village in Ranibennur taluk, Haveri district. There is a memorial in his name near the place on the banks of river Thungabhadra, which has now become a pilgrimage centre.

If one says fire is true
it is false without firewood.
If one knows how the fire hidden in firewood
does not burn that one is praanalingi said Ambiga
Chowdayya. / 1379 [1]

"Made one enter the woods,
drowned in boiling waters,
made the hairs matted,
and made one paint the ashes,
made to remove on&s dress,
pressing one down made the hairs to be plucked
made one to be questioned in all the towns.
For these words of mysterious Maya
the words of pretentious religious people
I feel shy-
said Ambiga Chowdayya. / 1380 [1]

To search in the woods
he is not a bush;
to search in the ponds
he is not fish or frog;
to do penance for him
he is not to be owned by adapted roles;
to search by punishing one's body
he is not a lender.
Linga hidden in eight bodies,
Ambiga Chowdayya
saw by reaching and touching it. / 1381 [1] Ambigara Chowdaiah is state forward writer; we can see sharpness in his ‘Vachanas’ (poems) which indicated his confidence level and courage to represent the truth in a rigid, orthodoxy society. 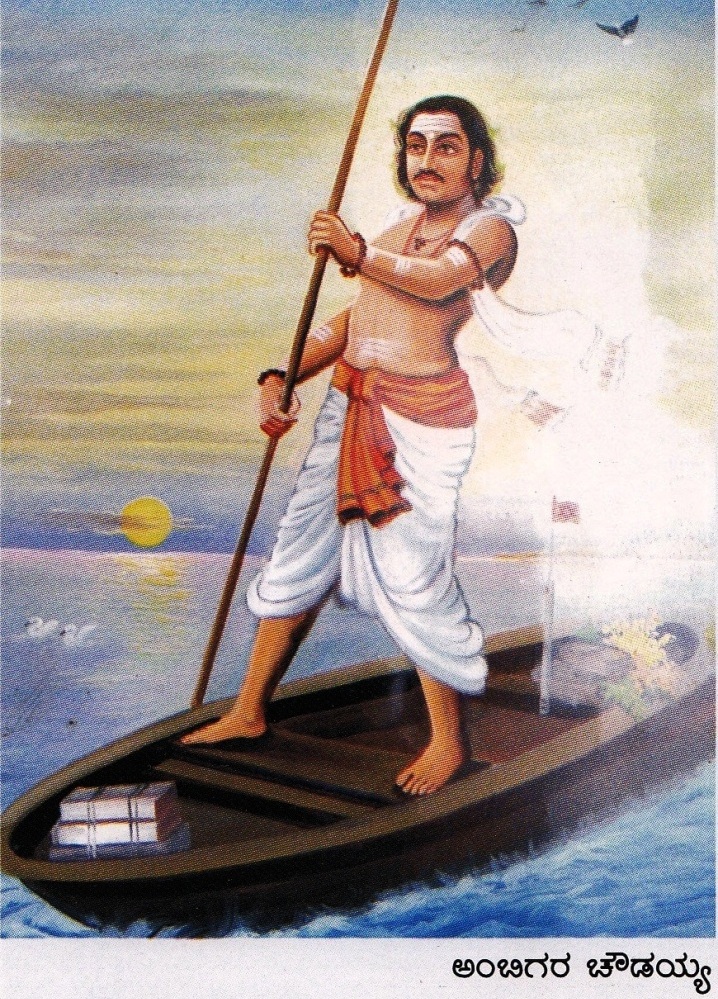 There is a cave named after him on the outskirts of Basava Kalyana . He was an active working member of Anubhava Mantapa . About 270 Vachana [ವಚನ] s written by him under the penname 'Ambigara Chowdaiah', have been recovered. Chowdaiah's choice of penname reflects independent nature and his deep respect for his Kayaka [ಕಾಯಕ] . He was a revolutionary Vachanakara, who harshly criticised pretentious people. Not only did he criticise, but also showed ways to improve oneself from his Vachana [ವಚನ] s, it is evident that he shunned blind beliefs, superstitions, and old religious customs. He has praised Basavanna , Padihari Uttanna, Haralaiah and others in his vachanas. Several sharanas have praised Ambigara Chowdaiah in their vachanas for his boldness in pointing out the mistakes of people, his awakened consciousness (arivu), and his spiritual life.

No garlands of demons
no trident or drum
no skull of Brahma
not decorated with sacred ash
not the one on the ox
not the one with rishis;
for,
the one who has no worldly affairs, has no name-
said Ambiga Chowdayya. / 1387 [1]

See how they belittle the linga tied upon the body
and attribute greatness to the linga on the hill.
If you find such empty headed fools
beat them with your hard footwear
said our Ambiga Chowdayya. / 1393 [1]