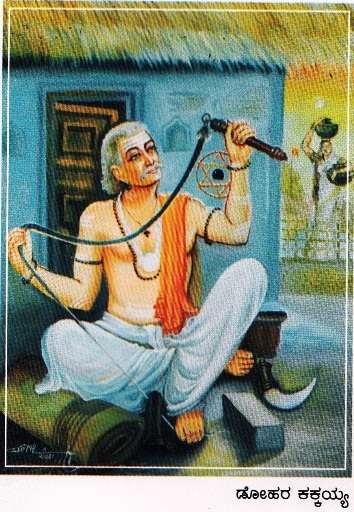 Dohara is the profession name, Doharas are pariahs who tan and polish leather. Kakkayya belonged to the Dohara caste by birth. He came from Maalawa (Maalava), in the Madhya Pradesh (Central India) and became a prominent Sharana and member of the Anubhava Mantapa. He worked with Basavanna and his associates in the task of creating a casteless society.

He was a great Prasãdi. Basavanna regarded him as his Boppa, an elder father.

O linga father You made me take birth in a mean caste
I am undone as I touch you and yet do not touch
If my hand cannot touch you can’t my mind too touch you
Abhinava Mallikarjuna [Vachana No.1787] [1]

He was closely associated with Chennabasavanna and his mother Akka Nagamma and was their reliable and confident defender. After the revolution of Kalyaana he went to Uluvi, Shivmogga District Karnataka, along with Chennabasavanna. In the battle that took place between Sharanas and the army of King Bijjala, he ‘died fighting near Kakkeri in Belgaum district Karnataka.

There are tanks, wells and a grave bearing his name in that place. 6 of his vachana have been traced with the signature Abhinava Mallikaarjuna. He tells how he overcame the constraints of his lower caste with the help of such savants as Basavanna and others. He says, ‘as soon as linga came and touched me all dross in my body got reduced to nothingness.’ These words give an idea of the social revolution of the twelfth century.
The pollution of my mean caste was gone
When touched your hands
Pollution of blood and semen were gone
The moment you were touched
As I offered the pleasure of touch to the face of Linga
My five senses were gone.
As the light of knowledge was established every thing was open and free within
As involved in action beyond union with the worldliness
Every thing was open and free without
Abhinava Mallikarjuna as I touched you
I too was free and open [Vachana No.1786] [1]