If words and actions are firm
there is no pollution of race or birth.
If words are good and action words
that is pollution without liberation.
Can any one be said to be highborn
If one is thieving and engaged with other’s wives?
Righteousness is caste, unrighteousness is pollution.
This duality should be understood and known.
Don’t be a mere servant to awl, scissors, and lower millstone,
Know Nijaatma Raama. [Vachana No.1930] [1] 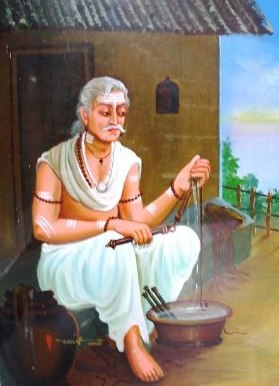 Maadara Chennayya belonged to the untouchable community. He was basically from Chola kingdom. He lived in Kanchi which was the capital of Karikalachola. Chennayya’s occupation was to tend the royal horse (hay cutter). He was a secret devotee of Shiva. The manner in which he fed shiva with gruel is made famous by many narratives. This legend story makes it obvious that devotion is important and not the caste, status or occupation. Chennayya was highly respected by the sharanas.

In Kalyana he undertakes the job of making footwear to the sharanas (cobbler). 10 of his vachanas have been found with the signature Kaiyulikatti Adigoontakkadiyaagabeda an Nij aatmaraamana. (Know Nij aathmaraama without becoming a servant of awl). In his vachanas, just as the signature phrase indicates, he talks about the issue of caste.