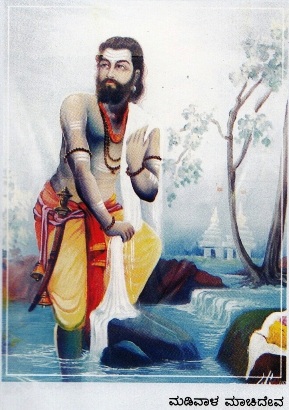 He is a great warrior of the 12th century saint, when the sharanas left from Kalyana to Uluvi he fought valiantly against King Bijjala's army to protect manuscripts of Vachanas written by Sharanas and snatched from army clutches who intended to burn these sharana literature. He died on the way to Ulavi at Karimane near Murgod in Belgaum district Karnataka. Several inscriptions mention his name. 354 of his vachanas have been found with the signature Kalidevaradeva.

Madivala Machideva was the coeval Sharana of the Guru Basaveshwara. He fought against the communal forces which intend to destroy the Vachana literature during the Kalyana Kranti. His was a washer man at kalyan. He also contribute a lot to define rectify the daily practice of Lingayath ethics. In his Vachana he specify Basaveshwara invented Guru (preceptor), Linga , Jangama (Priest), Prasada (Grace of God, holly food, Phala/return for the good deed) and even seven worlds. In another Vachana Madivala Machideva witness the historical truth in a beautiful manner along with other essential aspects Basava Kalyan.

Bringing a stone and making an idol out of it
The sculptor became guru, stone became disciple.
Guru who does not know the past or origin
And the disciple who does not know future
And how to receive teachings
Both are like stone and sculpture kalideva. [Vachana No.1893] [1]