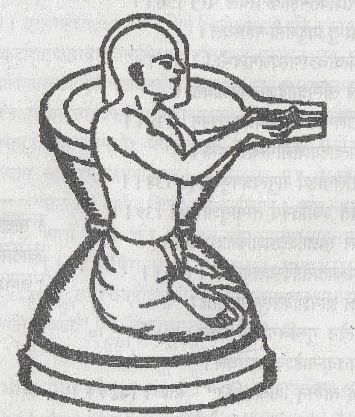 The picture above is intended to show that the Linga is the human body in Yogic meditative posture. Ishtalinga, placed on the palm of the hand as the object of meditation, is the symbolic microcosm of the macrocosmic deity.

Anga, himself being the microcosmic form of the Universal Consciousness, Shiva, looks upon Ishtalinga as himself and worships it with the idea and conviction that it is himself, though his identity with Shiva is now veiled and temporarily lost. “Ahangropaasana” thus becomes practicable and real, while in “Stavara Linga Puja” such kind of worship is not possible. Stavara Linga Puja being the worship of Statue (“Pratima”) or Image (“Prateek”), the devotee invokes the deity for worship which is, therefore, purely image worship. Ishtalinga worship, on the contrary, being “Ahangropaasana”, is no image worship. Another thing is that at the time Deeksha the Guru infuses the Linga with the life-spirit of the devotee and puts the Linga into the Prana of the devotee, i.e. He thereby makes the devotee conscious of his divine nature as microcosm. The “Ahwan”, of the deity, therefore, is unnecessary and forbidden.

The devotee by his “Ahangropaasana” gradually develops his spiritual power and attains union with Universal Consciousness in the third ventricle in the cerebrum through nerves of Optic Thalamus connected with “Aajna Chakra”. Universal Consciousness descends there from above to meet ascending from below. Hence “Aajna Chakra” is said to be the final and sixth stage for the union (Saamarasya) of Shiva and Jiva. This explains away the apparent difference between the seven stages of Paatanjala or Shãkta Yoga and the six stages of Linganga Yoga (Shivayoga) by Shatsthala.

The human body is Lingarupa, not merely figuratively or philosophically, as explained heretofore, but actually. The devotee in his meditative or contemplative posture is Linga itself, i.e., the Ishtalinga, the amorphous representation of “Parashiva”, as may be seen in the accompanying picture. The human body when initiated into the secrets of the spiritual philosophy and the graded course of devotional worship becomes “Mantra Shareera” (the body consecrated and elevated by the sacramental rite called “Deeksha”) and becomes the counterpart of Ishtalinga. The Ishtalinga worn on the body, the minified replica of the God, is the object of meditation and concentration rather than that of mere formal worship; and the devotee looks upon it as his reflection and follows a graded course of subjective culture of the soul, so as to be free from the three taints and the five sheaths. He then naturally comes to be essentially one with the God).