The boy Basavarasa was not just intelligent and shrewd but also bold and courageous. He was always first in answering as well as asking questions. He was not quarrelsome but very friendly among his peers. He would interfere whenever they quarrel and would try to pacify them to be calm. The classes were run every day at the corner in a spacious courtyard of Nandi temple at Bagewadi. There was a big pond outside but adjacent to the temple. Once, when children had gone down to wash their slates, a boy accidently stepped on a stone covered with green moss and slipped inot the pond. The children who were fearsticken came up and started shouting causing commotion. Immediately Basavarasa dived into the pond and dragged the drowning boy out. Elders had arrived by the time he brought him up over the steps. Like an experienced swimmer, he laid the boy flat on the ground, sat on his back and pressed rhythmically enabling the boy to omit all the water and he started fanning air. 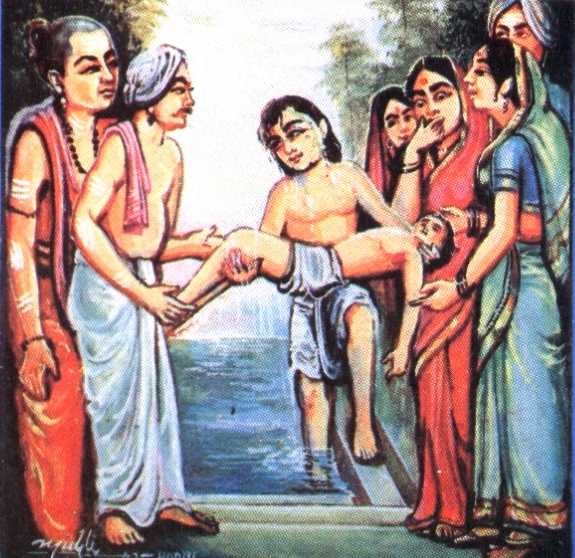 By then, the boy's parents had come. Suddenly one of Basavarasa'a peers who was wicked started complaining, "Basavarasa himself pushed your son into the pond. He saved him only because we started shouting. Since this boy was dull and lazy the teacher used to scold him and praise Basavarasa and this prompted the wicked boy to play mischief using the odd situation to defame Basavarasa. The parents belived this boy's words and they too started making noise.

"I swear in the name of God, I have not done it" , Basavarasa said. Coincidently and fortunately by that time the boy had regained the consciousness.

The crowd asked the boy, "Who pushed you into the pond ? was it Basavarasa ?

"No, I myself accidently slipped into the pond when I stepped on stone covered with green moss", the boy replied.
The parents came to know about the truth. They thanked Basavarasa for saving their son from drowning and expressed their gratitude. They praised him whole heartedly, and hailed his courage and chivalry.

"What you call life
Is a wind-blown lamp ;
What you call wealth
Is a market crowd
Do not, relying on this-
This wealth-destroy your life !
Do not forget to adore
Our Lord Kudala Sangama Deva !"
Back to Index