Basavanna's congitativeness increased day by day. Absurd practices, inhuman divisions and exploitations had made him more introvert. "Is religion just a restriction or an act of folly ? Is it not possible to remove the conciousness of high status and low status, which is responsible for the social evils ?" These thoughts used to come to his mind often.
At this time, he had attained the age of undergoing 'Upanayana ' or thread giving ceremony. It was the day of sacred thread wearing ceremony. All relatives had gathered. the parents called Basavanna to perform the religious rites. But he says :
"Appa, Nagalambike is elder to me. I eat fruits after I give her. I wear clothes only after she wears. Let her go through Upanayana firts, then for me". 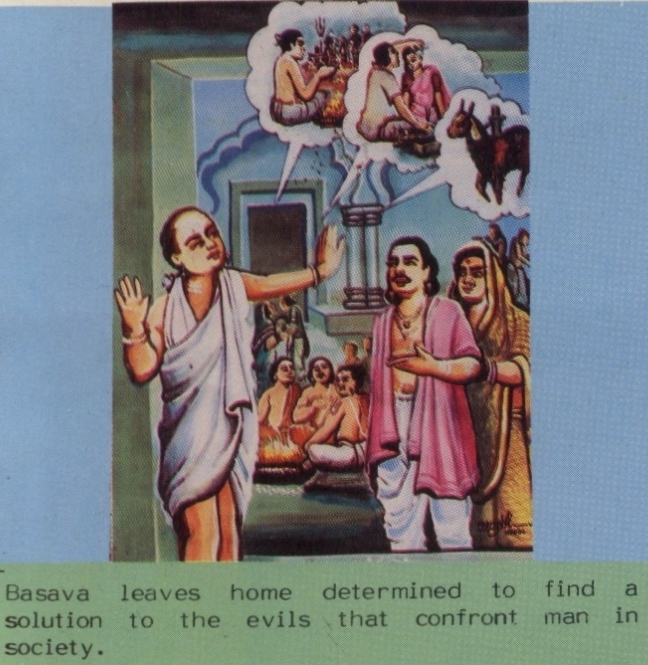 Avoiding to become furious in front of the relatives, Madarasa told him with patience,

"My son, there is no religious sanctification for women in our customs ; being a son, only you are eligible".
Women is an inseparable part of man. She gives birth as a mother, lives as a companion, fills home as a daughter, brings prosperity to family as a daughter-in-law. I can't accept the evil practice of denying the religious sanctification to her. this gender discrimination is not acceptable. the farmer, who works in our garden is a mon, why he doesn't have this sacred thread ?"

He is Shudra, he is not eligible for religious sactification..."

"If so, her is an acharya, a saint clad in saffron clothes. He is neither a woman nor a shudra, why he doesn't have the sacred thread ?

"He is Mahatma. He has severed himself from the caste impurity, blood relation and liabilities. That is why he has not worn..."

"Instead of getting solutions, my doubts are still becoming more complicated. Until my prudence accepts, I will not undergo the Upanayana". Madarasa became very angry,

"Basavaa... listen to your parents. You must understand the principle of Mathrudevobhava (mother is god) and Pithrudevobhava (father is God) my son"

"Don't you respect our words for atleast we have given you birth and nursed and brought you up ? You just listen what we say", said Madarasa in anger

Since Cuckoo can't build its own nest, it lays eggs in crow's nest. It is the crow which sits on the egg and enables the infact Cuckoo to hatch out and it feeds the infant too. With the arrival of spring the young Cuckoo sings as kuhoo kuhoo. Thereafter the crow, after realising that it is not its breed, starts biting it. Evne then, the Cuckoo does not sing 'Ka ka' instead of kuhoo kuhoo. But by then the Cuckoo's feathers would have grown, and it starts flying freely. Like this, God, the real Creator of me, had kept me temporarly in your family which symbolises the crow's nest. You have nursed me. Now, ignorance symbolising the month Magha (Winter) is over and realisation symbolising the month Chaitra (spring) has arrived. I have known my real-being. My soul is singing kuhoo kuhoo in desire of Shiva. Does it stop if you interrupt ?"
"Basava ....., if you don't listen to me and don't accept our practices, there is no place for you in my house...."

" As you wish father. I was waiting for these words. I am quite aware of my destiny. I neither have anger nor dejection towards any one. I have to get enlightenment and for that I will depart right now..."

Madalambike was ashtonished by listening to the conversatio between the father and son.

"My son, Basavarasa don't be angry. You can live as you wish, please don't go..."

"O my mother, birds take shelter in the trees during night. As the sun raises, they go in search of food. We were all still sitting in the tree of wordly affairs as long as darkness of ignorance existed. As the knowledge dawned like sunrise, why the illusion ? We have to search food for our souls. Please bless me mother..." Basavanna left home in 1142 A.D ( which corresponds to DUNDUBHINAMA year of Almanac calender) in search of a way to attain enlightenment.

The body is basket, mind the snake. See, how they live together, The snake and basket
! You have no notion when It may kill you, No notion when he bites ! O Lord Kudala
Sangama Deva If I can worship Thee Day after day, That the charm !
Back to Index