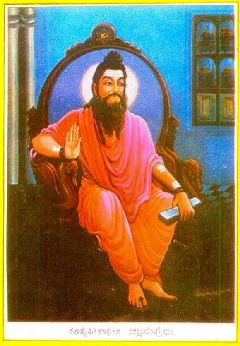 He belonged to a class of temple servants. And his father was a dance teacher. Allama’s service was to play upon maddale Allama was himself an expert at playing the maddale (a double - headed drum). By the time he reached the prime of youth, he had become well-versed in playing the drum in the service of Lord Mudhukesvara.

Several epics have been written on his life and achievement. Two narratives of his life have developed, named after the two important poets who have focused on Allamaprabhu's life, are known as Harihara tradition and Chaamarasa tradition.

According to Chaamarasa: Allam’as expertness in maddale attracted attention of Mayadevi, a charming girl, was enamoured of Allamaprabhu. But Allamaprabhu successfully resisted the temptation arid rejected Mayadevi outrightly and became Mayaakoolaahala (‘one who conquered Maya.’). From then onwards Allamaprabhu’s life took a spiritual turn.

According to Harihara: Allama fell in love with a beautiful dancer called Kamalathe. They were happily married until the sickness and early death of his wife. The grief stricken Allama wandered aimlessly until he came upon the saint Animisayya in a cave temple.

Saint Animisayya (or Animisha, "the one without eyelids", "the open eyed one") initiated Allamaprabhu into Lingayathism which emphasizes the worship of Ishtalinga. By hard penance under the guidance of Animisha Allamaprabhu became a great Sivayogi.

Prabhu grows into a mystic owing to his proximity. Subsequently he embraces the life of a wandering mystic (Jangama). He dispels the doubts in the minds of the seekers such as Muktayakka, Goggayya, Siddharaama, Goraksha and others and makes them tread the righteons path. He brings Siddhaarama along with him to Kalyaana (current Basava Kalyana, a taluk in Bidar dist, Karnataka, India) to witness the Great House that was run by Basavanna. He becomes the president of Anubhavamantapa (The Hall of Experience) and leads all sharanas in their spiritual quest. Even before the advent of the revolution of Kalyaana he leaves the place and achieves union with the GOD at Srishaila.

He has written vachanas, swaravachanas, creation vachanas and mystic chants under the signature Guheshwara. Some 1645 vachanas are extant. He focused on spirituality and mysticism. It is curious that he has expressed his experiences in a mystical language. His vachanas, pregnant with mystic experience and wisdom as they are, are riddle - like.

Allama's pen name, (ankita or mudra), Guheshvara (also spelt Guheswara or Guhesvara, lit, "Lord of the caves"), which he used most of his poems is said to be a celebration of his experience in the cave temple.

Allama Prabhu 's poetic style has been described as mystic and cryptic, rich in paradoxes and inversions (bedagu mode), staunchly against any form of symbolism, occult powers (siddhis) and their acquisition, temple worship, conventional systems and ritualistic practices. However, all his poems are non-sectarian and some of them even use straight forward language. According to the Kannada scholar Shiva Prakash, Allama's poems are more akin to the Koans (riddles) in Japanese Zen tradition, and have the effect of awakening the senses out of complacency. Critic Joseph Shipley simply categorises Allama's poems as those of a "perfect Jnani" ("saint").

Allamas poems are known to cover an entire range, from devotion to final union with God. The poems give little information about Allama's early life and worldly experiences before enlightenment. In the words of the scholar Ramanujan, to a saint like Allama, "the butterfly has no memory of the caterpillar". His wisdom is reflected in his poems–only a small portion of which are on the devotee aspect. More than half of the poems dwell on the later phase (sthala) in the life of a saint, most are about union with god and of realization (aikya).

In the Kritayuga
If the guru beat and taught wisdom to the pupil
I said it was great grace.

In the Tretayuga
If the guru scolded and taught wisdom to the pupil
I said it was great grace.

In the Dwaparayuga
If the guru frightened and taught wisdom to the pupil
I said it was great grace.

In the Kaliyuga
If the guru bowed and taught wisdom to the pupil
I said it was great grace.
Guheshwara,
I marvel at the injucitons of times you have prescribed. [Vachana No. 512] [1]